The biggest thing to come out of the country of Oblivia in eons – Hodman Dodmanott and Sally Forth! Two tiny adventurers with a lot on their minds and even more on their backs. Join these elderly amblers they set out to unfathom the modern world, meet strange and exciting new people and search for a decent place to camp!

This is one of the most well loved acts around, delighting audiences the world over with it’s witty improvisation, charming characterisations and utterly captivating effect.

The Flying Buttresses exploded onto the entertainment scene in 2000
where their unique illusion and heart-warming characters swiftly won them a huge following. Since then the act Hodman Dodmanott and Sally Forth has gone to capture the hearts and imaginations of audiences from Norway to New York.
In 2010 the company performed at the World Expo in Shanghai for Chinese premier Wen Jiabao.

The company is committed to a high level of attention detail, not only in their puppetry and performance but also in the visual aspects of the shows. This is enhanced by Rupert and Danielle’s background as special effects artists.
They have worked both separately and together for a number of prestigious companies, including Shakespeare’s Globe Theatre, The Jim Henson Company and Filmmaker Tim Burton. 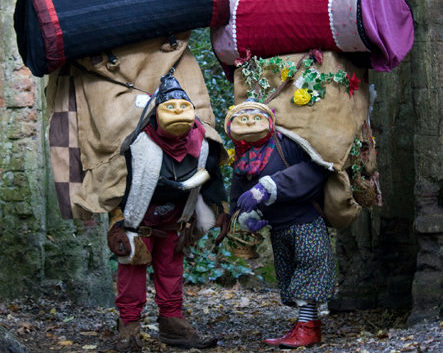