Jonathan Hawkins has spent the last 13 years touring the globe from the Cathedral of Notre Dame to Lincoln Center, the ancient Greek Theatre at Epidaurus to the world famous Birdland Jazz Club, Hawkins has become one of the most sought after crossover tenors with his “tour de force” voice.

Splitting his time between both New York and Los Angeles, Hawkins’ career has spanned both Opera and Musical Theatre. Internationally, he has been a featured soloist in Dvorak’s Stabat Mater, Handel’s
Messiah, Mendelssohn’s Elijah, Faure’s Requiem, and most recently Bach’s Magnificat, with the Los Angeles Chorale. His opera credits include Cosi Fan Tutte, Amahl and the Night Visitors, Dido and Aeneas, and The Ballad of Baby Doe.

Hawkins’ musical theatre career has taken him from Los Angeles to New York and several Nat’l Tours including Thoroughly Modern Millie, West Side Story, Joseph and the Amazing Technicolor Dreamcoat, All Shook Up and Sweeney Todd. He was also seen in the New York Premier of the London hit, Legacy Falls.

Hawkins currently tours with Andrea Bocelli’s One Night in Central Park: Revisited, Live at The Garden: Elton John, and his newest project On Broadway which will feature Broadway’s biggest names opening in January of 2019.

An accomplished director and producer, Hawkins has created several touring projects for LML Presents, The Muse Presents, as well Crystal Cruise Lines. His concert series have been seen throughout the US and abroad featuring his productions of Soundstage, An American Songbook Soiree, An Evening in the South Pacific, The Symphony: A Concord of Sound, Ovation, and Hooray for Hollywood.

Rumor has it, Ms. Lundstedt has been singing since she could talk. Whether it be working for Disney or belting out Opera’s greatest hits, Heather has turned her passion for music into a flourishing and diverse career.

Heather has also performed in theaters throughout the United States. Most notably, she played Julie Jordan in Barn Stage Company’s production of Carousel in Concert alongside the Temecula Valley Symphony. She also portrayed Marian Paroo in The Music Man of which Don Grigware of Broadway World stated, “Lundstedt’s gorgeous soprano is one of the best I’ve heard onstage in a long time”.

Her one woman show, “Loesser Known: The Stories and Songs of Frank Loesser” has earned her rave reviews all over the country. Broadway World said, “her voice is thrilling and with just the right amount of girlish charm, she keeps fans engaged and begging for more. Lundstedt should be on Broadway, that’s to be sure, but for now, let’s be grateful that she is here with us.”

Other credits include: Brenda Strong in the West Coast premiere of Catch Me if You Can at Moonlight Amphitheatre, Sarah Brown in Guys and Dolls, Christine in Yeston/Kopit’s Phantom, Laurey Williams in Oklahoma.  Opera credits include Dorabella in Cosi Fan Tutte as well as serving as the soprano soloist in Handel’s Messiah and Faure’s Requiem.

Heather is a frequent guest artist with symphonies around the world and has had the pleasure of playing sold out audiences at the prestigious Birdland Jazz Club in New York City. Ms. Lundstedt is currently on tour with LML Music Presents’: ‘Live in Central Park: Andrea Bocelli; Revisited’ and ‘The Unreachable Stars’ starring Broadway’s Jeremy Stolle.  She currently resides in the UK with her husband, Stuart. For more information please visit: www.HeatherLundstedt.com

Hawkins has also been featured in both TV and Film appearing in Gossip Girl, The Good Wife as well as studio work for the Spiderman Series, and High School Musical. 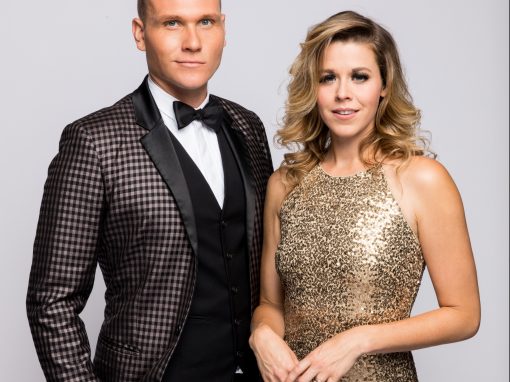